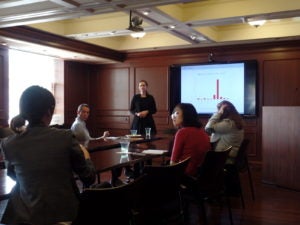 The energy and climate policy research seminar aims to enhance intellectual exchange among faculty and students by providing a forum to discuss research and policy topics related to the international and domestic dimensions of energy and climate change policy. Speakers will include members of the Georgetown community as well as invited faculty and practitioners from the Washington area and beyond.

03/19 – “How clean is ‘Refined Coal’? An Empirical Assessment of a Billion Dollar Tax Credit.” Brian Prest, Resources for the Future

September 26: “Club-Based Strategies for Regulating Soot (BC) and Methane in the Arctic: Implications for the Region and Global Cooperation on Climate Change” David Victor, Professor of International Relations and Director of the Laboratory on International Law and Regulation, UCSD.

September 29th: “A Climate of Protection: Trade Policy Responses to Chinese Solar Imports in the EU, the US, and Japan” Jonas Meckling, Assistant Professor of Energy and Environmental Policy, Department of Environmental Science, Policy and Management, University of California, Berkeley

September 23 – “How Much Energy Do Building Energy Codes Really Save? Evidence from California,” Arik Levinson, Professor of Economics, Georgetown University

October 21 – “American Climate Politics and the Echo Chamber Effect,” Dana R. Fisher, Professor of Sociology and Director of the Program for Society and the Environment, University of Maryland

November 12 – “Next Year in Paris: Building Flexibility and Ambition into a New Global Climate Agreement,” Elliot Diringer, Executive Vice President of the Center for Climate and Energy Solutions (C2ES)

March 19: “The future of coal in the US and China: Technology, Policy, and Opportunity”
Julio Friedmann, Deputy Assistant Secretary for Clean Coal, Department of Energy’s Office of Fossil Energy