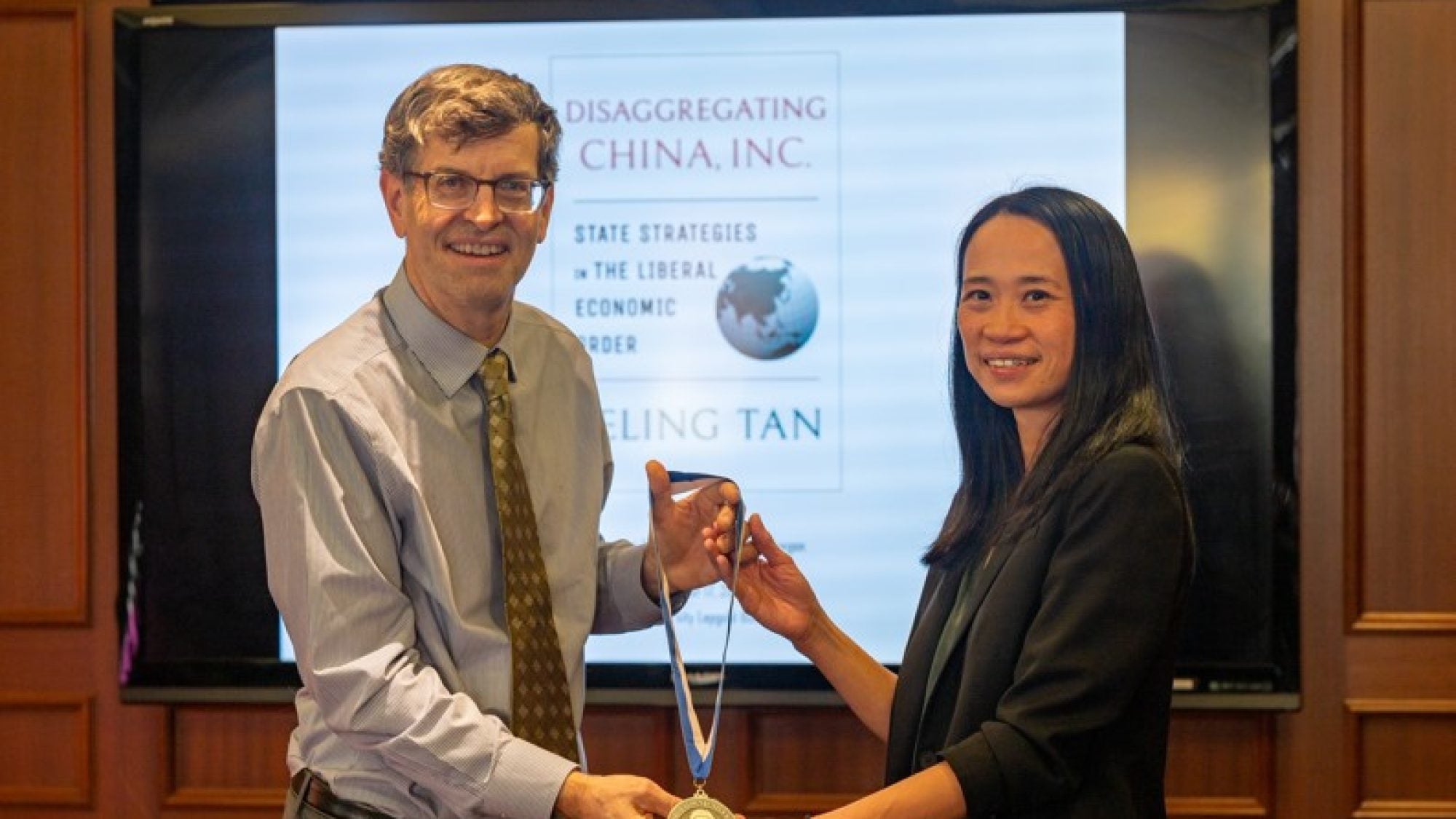 On Thursday, November 17, the Mortara Center awarded Yeling Tan for her book Disaggregating China Inc.: State Strategies in the Liberal Economic Order (Cornell University Press, 2021). The prize was awarded by Professor Andrew Bennett to Tan. Tan also delivered the Lepgold lecture on the state of U.S.-China economic relations in 2022.

Set in the aftermath of China’s entry into the World Trade Organization, Disaggregating China, Inc. questions the extent to which the liberal internationalist promise of membership has been fulfilled in China. Yeling Tan unpacks the policies that various Chinese government actors adopted in response to World Trade Organization (WTO) rules and shows that rather than disciplining the state, WTO entry provoked a divergence of policy responses across different parts of the complex party-state.

Disaggregating China, Inc. breaks open the black box of the Chinese state, explaining why WTO rules, usually thought to commit states to international norms, instead provoked responses that the architects of those rules neither expected nor wanted.

Yeling Tan is an assistant professor of political science at the University of Oregon. She is also a nonresident senior fellow at the Peterson Institute for International Economics and a nonresident scholar at the UCSD 21st Century China Center. Her research sits at the intersection of international and comparative political economy, with an emphasis on globalization and China’s economic governance. Her book, Disaggregating China, Inc. (Cornell University Press, 2021), examines the variegated impact that entry into the World Trade Organization had on China’s economic and industrial policymaking. She has published articles in Comparative Political Studies, Governance, the China Journal, and Global Policy, and is coauthor of China Experiments (Brookings Institution Press, 2012), and coeditor of Asia’s Role in Governing Global Health (Routledge, 2013).

Tan’s policy analysis has been published in Foreign Affairs, Foreign Policy, the Washington Post, and by the World Economic Forum. She holds a PhD in public policy from Harvard University, an MA in public administration in international development from the Harvard Kennedy School, and a BA in international relations and economics from Stanford University. Apart from research on globalization and China, she has also worked in the public and nongovernmental sectors on a range of issues including economic development, international security policy, global governance, and governance innovations.