The prize awards $1,000 to the author of the best book in international relations, broadly conceived, each year. To receive the award, the winning author agrees to give a lecture on his or her scholarship at the Mortara Center.

Nominations for the 2020 prize closed on June 1, 2021. If you would like to be notified when nominations open for the 2021 award, please email mortaracenter@georgetown.edu.

The winner of the 2020 Lepgold Book Prize is Jason Lyall for Divided Armies: Inequality and Battlefield Performance in Modern War. Dr. Lyall discussed his research with Mortara Center director Abraham Newman at this year’s Lepgold Book Prize Award and Lecture on November 18. Watch a recording of the discussion here. 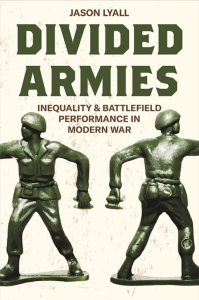 About the 2020 Prize Winning Book

How do armies fight and what makes them victorious on the modern battlefield? In Divided Armies, Jason Lyall challenges long-standing answers to this classic question by linking the fate of armies to their levels of inequality. Introducing the concept of military inequality, Lyall demonstrates how a state’s prewar choices about the citizenship status of ethnic groups within its population determine subsequent battlefield performance. Treating certain ethnic groups as second-class citizens, either by subjecting them to state-sanctioned discrimination or, worse, violence, undermines interethnic trust, fuels grievances, and leads victimized soldiers to subvert military authorities once war begins. The higher an army’s inequality, Lyall finds, the greater its rates of desertion, side-switching, casualties, and use of coercion to force soldiers to fight.
In a sweeping historical investigation, Lyall draws on Project Mars, a new dataset of 250 conventional wars fought since 1800, to test this argument. Project Mars breaks with prior efforts by including overlooked non-Western wars while cataloguing new patterns of inequality and wartime conduct across hundreds of belligerents. Combining historical comparisons and statistical analysis, Lyall also marshals evidence from nine wars, ranging from the Eastern Fronts of World Wars I and II to less familiar wars in Africa and Central Asia, to illustrate inequality’s effects.
Sounding the alarm on the dangers of inequality for battlefield performance, Divided Armies offers important lessons about warfare over the past two centuries—and for wars still to come.

Jason Lyall is the inaugural James Wright Chair of Transnational Studies and Associate Professor in the Government department. He also directs the Political Violence FieldLab at the John Sloan Dickey Center for International Understanding. His research examines the effects and effectiveness of political violence in civil and conventional wars.

Past Winners of the Lepgold Book Prize